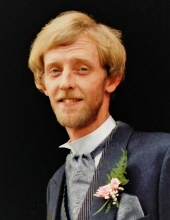 Mark Hackler, 63, passed away peacefully in his home in Appleton, WI on August 22, surrounded by his loving family. Born the oldest of eleven siblings to Andy and Betty Hackler (née Whitmarsh) on September 3, 1957 in Dallas, Texas, Mark deeply loved the natural world, and spent much time camping and hiking throughout the Western United States and United Kingdom. Mark served in the Air Force, taking the opportunity to live in the U.K. He loved his time in the U.K., where he became an expert on local history and enjoyed sharing this knowledge – although he was just as likely to point out a steer in a nearby farm as “udderly bare.” After leaving the military and returning to the United States, he worked as an instructional designer for major technology companies and became the father of four children. He was a loving father and husband who worked hard to instill in his children a love of learning and an appreciation for the written word.

Mark was passionate about the written word and cherished his book collection of over 3000 books, all of which he had read, many more than once. Even though he suffered from lung disease, he continued to impact the world by starting and managing a forum of intellectual, mindful, and caring discourse and dialogue that touched more than 31k lives. Guided by his spirituality, Mark was an inspiration to his family, friends, and many people struggling with a conflicted nation and world. Mark will be greatly missed by many, and he is survived by a large and loving extended family who dearly miss him.

His funeral will be September 5th at 1:30pm CST. In light of the ongoing pandemic, for more information on attending or the live stream, contact raehackler@gmail.com

Mark was passionate about putting words into action to impact a better world. Combining a love of the written word and history, one of Mark’s favorite non for profits was the Hill Museum and Manuscript Library. Its mission to digitally preserve manuscripts threatened by war, disasters, looting, and neglect, making them accessible for future generations. In lieu of flowers, please consider a donation to St John's University in Mark’s name by using the direct link below in the memorial contributions section.
To order memorial trees or send flowers to the family in memory of Mark A Hackler, please visit our flower store.