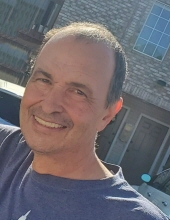 Mark Holly entered his eternal life on May 6, 2021 with his loving family by his side.

He was preceded in Heaven by his father Lester Holly and mother in law Trudy.

Mark’s Family would like to thank the team of ThedaCare Hospice and Dr. Shannon Schmidt’s office. Truly the world is made a better place by the love and dedication of the nurses that cared for Mark in his fight with cancer.
To order memorial trees or send flowers to the family in memory of Mark Holly, please visit our flower store.