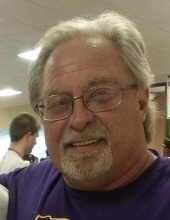 Friday March 20th, 2020, Mark Edward Gregory Fredrick Seifert left this world unexpectedly at age 61 to join the heavenly hosts. He was a man worthy of 3 middle names because 1 would just not have done justice. He was a man that was utterly devoted to his children and grandchildren. He loved to spend time with his family and just sitting around the living room telling fantastic stories that always left everyone in amazement.

He was fascinated with history and the world. Among his favorite stories were that of exploring Europe during his study abroad. He always lamented that he never had a chance to go to Transylvania because what child wouldn’t want their father to tell them stories of the time he visited Dracula's Castle or the time he decided to go see the Cliffs of Dover in the rain and cold instead of going with his friends to a pub where they supposedly met Eric Clapton before he really started getting big.

He loved watching his kids play ball and attending their concerts. He never missed one if he could help it. He worked hard to make sure that his kids could always have every opportunity they wanted to pursue. In his last days his grandchildren were the light of his life and they brought him so much joy.

He is preceded in death by his father Victor Seifert who was a photographer in World War II whom shared pictures of places he had been and by his mother Hildegarde “Rusty" (Resch) Seifert whom raised him as a single mother. He was her whole world.

He is survived by his children Faith Seifert, Thomas Seifert, Gloria Seifert, and Dominic Seifert, ex wife Judy Seifert, step-daughter Hope Chouinard. He is also survived by his angels, his grandchildren Gabriel Sickinger, Lailah Seifert, Raven Seifert, Jasmine Potrowski, and Zinnya Brightman along with many other extended family and friends.

We feel blessed to have had such an amazing father and it is with a heavy heart we have to wait to celebrate his life with all the wonderful people whose life he touched and whom touched his life. We will announce a date for a service after the group ban has been lifted so that we can all celebrate his life together.

Dad, we all love you and miss you. We are all in our 20s still and weren’t ready to let you go but we are grateful you are no longer in pain and know you are reunited with Grandma watching over us. Maybe before long you can have that drink with Clapton.

Until we meet again, with all our love, your children.
To order memorial trees or send flowers to the family in memory of Mark Seifert, please visit our flower store.