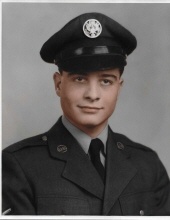 Merrill David Cornell, age 85, faced many challenges throughout his life and handled them with courage and determination while always maintaining a strong relationship with God.
Born August 25, 1934 in Green Bay to Kenneth and Gladys Cornell. After graduation from high school he proudly served his country in the USAF for four years during the Korean Conflict.
He married Sharon Gilbertson in Wittenberg, and after living in Milwaukee for a few years, they moved to Appleton where they raised their four children.
Merrill was employed at Miller Electric for many years until his health required an early retirement. After retiring he attended daily mass at Sacred Heart Church and volunteered many hours at the King Veterans Home, Brewster Village and especially with Chapter 18 DAV of which he was Chaplain for 12 years and Commander for 6. He also ran a Papa Care for his grandson. He was a Life Member of VFW 8086 Elderon.
He and Sharon loved to travel…Hong Kong, China, Hawaii, Europe and many places in the United States Merrill was lucky enough to be picked to join the Honor Flight in 2015. That trip was emotional, memorable and one he cherished forever. He was always ready for the next trip…even if it was only to the cabin to ride the four-wheeler. He enjoyed many years watching all of his grandkids and great-grand children’s activities in all kinds of weather. Merrill had a way of lightening up a room with his wit and humbling it with his kindness and caring.
He is survived by his wife Sharon, three daughters: Darla (Keith) Opper, Wittenberg, Cheri (Jeff) Meyer, Hortonville, Susan (Jeff) Wolter, Mackville, one son Jay (Pam) Cornell, Greenville, six grandchildren: Craig (Tabitha) Garton, Tyler (Chelsea) Meyer, Lauren (Kevin) Kangas, Abigail (Mitch) Kidd, Sabrina (Walter) Brzoska, Mason Wolter, six great-grandchildren: Greyson and Evelyn Meyer, Myla Garton, Nora and Hattie Kangas and Jackson Brzoska, four god children: John Ostrowski, Ricky Cornell, Jim Beckwith and Mary Heenan and his sister Jeanne Doering.
Proceeded in death by brothers Don, Johnny and Clyde Cornell and sisters Shirley Ostrowski and Donna McGillivray.
A special thank you to caregivers Nicole from Bright Star and Jane whose special care was greatly appreciated, friends and neighbors of Highland Heights especially Tom and Elaine, our very special friends, Deacon Jeff, the Veterans Administration and the Green Bay At Home Program.
Per his wishes there will not be a funeral service, the family will hold a private celebration of life.
To order memorial trees or send flowers to the family in memory of Merrill David Cornell, please visit our flower store.