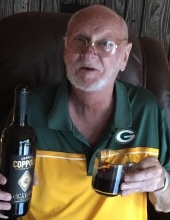 The man, the myth, the legend; Michael Allen Perket (Satch), born January 29, 1949, passed away on Tuesday, August 27, 2019 surrounded by family after a lengthy battle with cancer.

Until his health sidelined him, Mike was either riding his Norton or on the golf course as often as possible. He also enjoyed shooting darts at the local pub with his son, Mike and daughter in law Sarah, and his bestie, Toots("Ma"). They were quite the team. He made many friends along the way, he was referred to as "dad" or "the old guy". Mike found humor in every situation and you could always count on him to be telling a crazy story or joke, his laugh was infectious. Although it was because of his failing health, Mike made the best of the situation and was able to make numerous road trips to the VA hospital in Madison with his best little sister, DeeDee. He spent as much time with his grandchildren as possible. Mary (his "mare-bear"), Alex (his golf buddy) and Lily ("his Lily-bear"). These times were very important to him. Between great friends and family, many memories were made over the last year.


As a profession, Mike was an over-the-road truck driver. He also had success as an owner-operator, until his health again sidelined him.


Respecting Mike's wishes, there will not be a funeral service, however, there will be a "celebration of life". Details are pending.


We would like to offer a special thanks to Chris and John Michels for offering Mike their home for him when he couldn't stay at his own, and also all of his friends and family that kept him company in his last week at the hospital.
To order memorial trees or send flowers to the family in memory of Michael A. Perket, please visit our flower store.