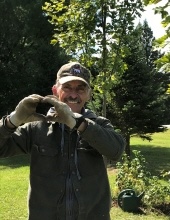 Michael “Mike” A. Goble died on October 9, 2020 at Theda Care in Neenah. He was 69 years old. Mike was born on November 11, 1950 in Sycamore, Illinois, the son of Theodore and Garnet Goble who preceded him in death. After the death of his first wife, Rita Gilson, Mike moved to Wisconsin. On August 7, 2007, he was joined in Holy Matrimony with Jacqueline T. Prickette.

Mike was a hard worker and always kept busy. Since 2006, he was employed at Ariens in Brillion, Hank’s Tavern in Menasha, and most recently, as St. Patrick Parish’s loyal maintenance man in Menasha.

He is survived by his wife, Jackie, four daughters, Jamie, Brandy, Carrie, and Sherry. He is also survived by Jackie’s daughter, Cheyenne, and many grandchildren and great-grandchildren.

“Thank you, Mike for being my husband and my best friend. You have been my Sir Michael A. Goble, my One Knight of Columbus, and most of all, my One True Love!
But now it’s time to rest. I’ll see you soon! Good-bye my Love.” Your wife, Jackie
To order memorial trees or send flowers to the family in memory of Michael Goble, please visit our flower store.