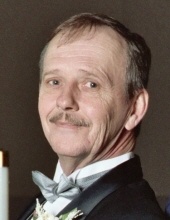 Michael Jon Everson was born March 5th, 1948 and passed away peacefully on January 28, 2022. He was a graduate of Appleton West High School, class of 1966. He went on to enlist in the Marine Corps where he was a radio operator and repairman. He went on to achieve the rank of sergeant, earn numerous medals and was awarded an honorable discharge. He married Lynn Delrow in 1972 and moved to Jacksonville, Florida and raised 2 sons, Scott (Kristen) Everson and Andy (Lisa) Everson. Mike was a hard worker and was successful in the automobile air conditioning industry through the port in Jacksonville. He was employed by World Cars, Joy Serve, and Cadillac over this period of time. In his past time he enjoyed spending time at “Miller’s Landing” where he would fish and shrimp. After 20 years in Florida, he relocated back to the Appleton area and married Linda Schmitz. Mike was employed at James River Paper Corporation in Menasha. Throughout his life he was a loving father and had a great sense of humor. He loved to make people laugh and had a “Marine” sense of humor. It would not be uncommon to find him reminiscing at the American Legion with his brothers and sisters from all branches of service.

Mike is preceded in death by his Mother Matilda (Ochodnicky) Everson, his Father Donald Everson and brothers Donnie and Robert (Sue) Everson. Mike is survived by his sisters Donna Mortell, JoAnn (Douglas) Ehlke, Cyd (Al) Olson, brothers Dennis Everson, Steve (Mare) Everson, and Timothy Everson, Lynn Everson Bruehl, Linda Everson Schmitz, and sons Lt Col Scott Everson, and Andrew Everson. He is also survived by his grandchildren, Alex Everson, Cadence Everson, Nicholas Everson, Mckenzie Everson, Braeden Everson, Easton Jentz, Nya Kametler, and Lily Kametler. Mike spent his last years living with his son Andy and his family where he was loved and enjoyed spending time with his grandchildren daily. He recently moved to Copperstone Assisted Living and we are grateful for the care they provided him..
To order memorial trees or send flowers to the family in memory of Michael Jon Everson, please visit our flower store.