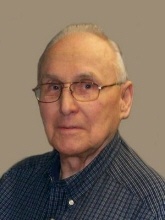 Milton L. Kanitz, age 90 of Appleton, died December 16, 2014 at Emerald Valley Assisted Living in Appleton after living with mixed dementia for many years.

He was born November 6, 1924 in Two Rivers, Wisconsin, the oldest son of Laura E. Nimmer and Edwin A. Kanitz.

He graduated from St. John's Lutheran High School where he was a sprinter on his high school track team. He served in the Navy from 1943 to 1946 on the sea plane tender the USS Currituck, AV-7. There he proudly served as captain's orderly and on the 5" gun team.

He married Dorothy Robley of Clarks Mills on May 4, 1949 and moved to Beloit, Wisconsin, where he worked as a set-up welder for Fairbanks Morse Corporation until he retired in 1987. He was married to Ann M. Kooistra for eleven years until her death in 1984.

Milton's eyes sparkled as he freely joked and laughed whenever he engaged in conversations. He enjoyed telling stories including his Navy experiences. Milton loved his family and had great pride in each one of them. He loved gardening and yard work and was dedicated to hand digging every last dandelion. Milton enjoyed sharing one liner philosophies, eating hearty meals and finishing every last morsel. He offered innovative solutions to problems, played dartball at Our Savior's Lutheran Church in Beloit, and square danced. Milton later attended weekly dinner and dance nights at the Beloit Moose Lodge with his friend and life partner, Marge Risum. He moved to Appleton in 2001 and has resided in assisted living since 2006.

Visitation will begin at 10:00 am on Saturday, January 10, 2015 at Faith United Methodist Church, 633 Detroit Street, Sheboygan Falls, Wisconsin, followed by a memorial service officiated by Pastor Susan Gaul-Safford at 11:00 am at the church. Interment with military honors will take place at Sheboygan Falls Cemetery.

Milton's family thanks the staff at Emerald Valley Assisted Living in Appleton for their skilled, compassionate care they provided Milton these past four years. Thank you for welcoming him as part of your family. We know he made you laugh. Also, our deepest gratitude to the Affinity Hospice staff for helping provide care and comfort for Milton this past year.