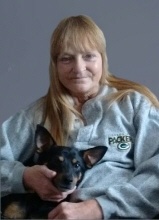 Pam (Mattison) Yowell, age 54 of Appleton, passed away on February 7, 2017 at St. Elizabeth Hospital. She died after a long illness and was surrounded by family and friends. Pam was born September 30, 1962 to the late Earl and Ann (Wilson) Mattison, and attended school in Kaukauna. Pam loved the outdoors and enjoyed spending time with friends and family. She also enjoyed spending time with her service dogs Samie and Chewie, who she loved to spoil with toys and attention. She was preceded in death by her father Earl, her mother Ann, her sister Mona, and her brothers Terry and Richard.