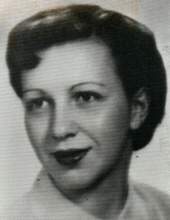 Patricia “Pat” Langman, died Thursday August 17, 2017, after a brief battle with cancer.
Pat was born on July 12, 1931 to the sounds of a choir singing in the church next door. Her parents, the late Ann Eleanore (Scherck) and Walter Tyson Hill named her for a popular singer of the day. Despite those auspicious beginnings she claimed no musical talents whatsoever. She was a lifelong resident of Appleton, and she loved growing up in a large and lively family. All her life she was proud to be the big sister. She married the love of her life, Harry Langman, Jr. on Oct 15, 1954 and they shared 53 years together until his death in 2006.
Pat believed strongly in volunteering. She was a Sunday School teacher; Brownie leader; and Girl Scout
'cookie mom". She led weekly memory-sharing sessions at two area nursing homes. A dedicated liberal; she phone-banked in many Democratic candidates' campaigns. Closest to her heart was her role as a UFRS volunteer for 14 years at Highland and Ferber schools. She loved each and every first-grader she helped inspire to read; always referring to them as "my kids".
In the last two years, Pat was an integral member of the Friends of the Outagamie Cemetery committee as they worked to restore the Outagamie County Cemetery. Pat spoke at the dedication of the friends she made during her childhood living on-site at the County Asylum where her father was employed as the farm boss. She also contributed her knowledge to the Asylum: Out of the Shadows exhibit currently displayed at the History Museum at the Castle.
Pat and Harry had four daughters, Barbara Langman, Nancy (Craig) Hollis, both Appleton; the late Kay (Dan) Pollock; and Jill (Mark) Schwarz, Brighton, Colorado. Pat taught them to stand up for their beliefs, and was proud of their choices in life. Her beloved grandchildren were the joy of her life. She and Harry were proactive grandparents and spent much time helping to nurture them. They are: David (Ryan) Schwarz, Westminster, Colorado; Kathryn (fiancé: Randy Weyer) Pollock, Seattle, Washington; James Pollock, Lexington, Kentucky; and John (special friend Kristina Stoklosa) Appleton. Unfortunately, she had yet to meet her first great-grandson, Layne Paxton Schwarz, born earlier this month.
Also surviving are her sisters: Jessie Retson, El Cajon, California; Marilyn Lipscomb; La Mesa, California and Kathleen (Grady) Chapman, Florida; her sister-in-law: Dottie Hill, Neenah, and numerous cousins, nieces, nephews and their families.
In addition to her parents, husband, and daughter Kay, she was preceded in death by her sister Barbara Hill; her brothers Charles and James Hill; her sister-in-law Sandra Hill; brothers-in-law James Retson and Patrick Lipscomb; and her much-loved nephew Corky Retson.
The family would like to offer their sincere thanks to Dr. Steven J. Hagen (aka the best doctor in the world) for his diligent and compassionate care of Pat over the years.
As per her wishes, there will no formal funeral. A family memorial will be held at a later date.
Gestures of concern should be directed to the United Reading for Success program in the Appleton
Public Schools, the Friends of the Outagamie County Cemetery, or the History Museum at the Castle.
Pat always clapped for Tinkerbell.
Mum: We'll love you forever. We'll like you for always. As long as we're living our mother you'll be.
To order memorial trees or send flowers to the family in memory of Patricia "Pat" Langman, please visit our flower store.