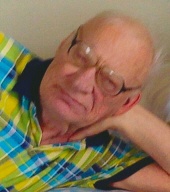 Pat was enrolled at St. Mary's Grade School in Kaukauna as a boy and graduated from Kaukauna High School in 1965. He then attended Stevens Point University of Wisconsin and graduated with a degree in Education and Social Sciences. He was a principal's assistant and also taught at St. John's Grade School in Little Chute, Wisconsin. He later worked at the reference desk at the Appleton Public Library and retired after twenty years.

A private memorial service will be held at a later date. In lieu of flowers, memorials may be made to the Alzheimer's Association - Greater Wisconsin Chapter, 2900 Curry Lane Suite A, Green Bay, Wisconsin 54311 in Pat's memory.
The family wishes to extend a special thanks to the staff and volunteers at Care Partners of Little Chute and Cherry Meadows Hospice for all the love, care and support given to Pat.