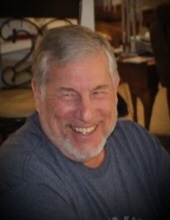 Paul Eldy Bruner born October 23, 1949 to Norval and Alberta Bruner passed away on January 25, 2021 after a battle with cancer. He met and married Lynda Urch on June 27, 1970 and they spent a wonderful 50 years together. Together they had 2 children. He was an avid fan of watching car racing at the local tracks around the state. He was a social butterfly who talked to anyone who would listen, just like his father.
He is survived by his loving wife Lynda, their children Jennifer and partner Dan Johnson, Eric(Ann) Bruner and , his grandchildren Daniel Strong and Cody Kass, his mother Alberta, brothers Philip, Timothy, and David, aunts, uncles, nieces, nephews, cousins, family and friends. He was preceded in death by his father Norval and brother Dan(Byrd).
There will be a visitation for the public on Saturday February 20th from 9am to 11am at Mason Street Church of Christ 2600 N Mason St Appleton WI 54914. There will be a private service for the family to follow.
To order memorial trees or send flowers to the family in memory of Paul Eldy Bruner, please visit our flower store.