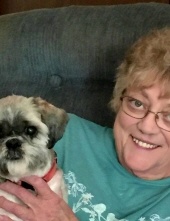 Peggy Ann Bandt, age 73, of Wautoma, died peacefully with her son by her side on Friday September 24, 2021 at ThedaCare Regional Hospital Appleton.

She was born on April 5, 1948, the daughter of Kenneth E. Udelhofen and Bette M. (Johnson) Udelhofen.

Peggy grew up in Belmont and graduated from Belmont High School in 1966 and went on to graduate from MATC in Madison. She worked for the State of Wisconsin for 20 plus years before moving to the Northwoods with her family. There she worked for a law office, Parker Lake and several years at Rural Insurance & Farm Bureau where she made many many friends.

Peggy loved spending time with her beloved dog Sassy Sue and her grandchildren when she could. She was also very proud to be a grandma.

She is survived by her son Daniel Bandt, Appleton, and 3 grandchildren Henry, Emilia and Cooper.

She is preceded in death by her parents, former husband Hollis Bandt and long time special friend Kenneth Fricker.
In lieu of a service the family plans to reunite Peggy with her parents at Calvary Cemetery in Platteville at a later date.

The family would like to wish a heartfelt thanks to the staff at ThedaCare Hospital in Wild Rose and ThedaCare Regional Hospital Appleton for all they did for Peggy.
To order memorial trees or send flowers to the family in memory of Peggy Bandt, please visit our flower store.