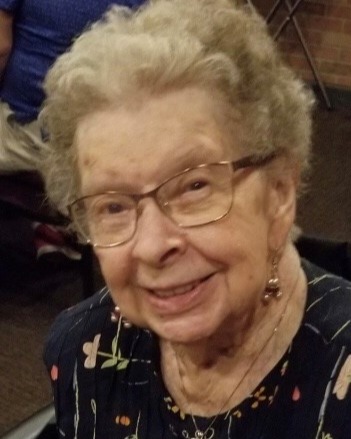 Peggy Nileen Laux, 92 passed away October 18, 2022 at Prairie Home Assisted Living in Menasha, Wisconsin.  Peggy was born in Harper, Kansas on July 25,1930 to Newton and Marie (Jones) McClellan.  She attended high school in Corpus Christi, Texas.  Peggy married Dennis Laux in Colorado Springs, Colorado, they then moved to Appleton where they raised their family.  Peggy moved back to Corpus Christi, Texas in the late 1980s to be closer to her family.

Peggy was employed at the Institute of Paper Chemistry in Appleton as a secretary and administrative assistant for many years.  She also worked at Del Mar College in Corpus Christi until her retirement.  She remained very active at St. John's United Methodist Church in Corpus Christi until she returned to WI in September 2018 to be closer to her children and grandchildren.

Peggy was blessed with a beautiful voice and found great joy participating in her church choir and other choirs over the years, most recently with the Y-Not Chorus and Faith United Methodist Church choir in Neenah.  Peggy also had the honor to perform with the Del Mar Master Chorus at Carnigee Hall in 2014.

A memorial service for Peggy will be held at 11:30 AM on Monday, November 14, 2022, at Faith United Methodist Church, located at 1025 Tullar Road in Neenah, with Rev. Tim Albrecht officiating.  Visitation will be held at the church on Monday morning from 11:00 AM until the time of the service.

To order memorial trees or send flowers to the family in memory of Peggy N. Laux, please visit our flower store.