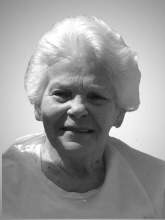 Peggy was born in Wittenberg, Wisconsin to Raymond and Katherine Bibinger on March 12, 1926. Peggy grew up in many Wisconsin towns until finally settling in Neenah. She graduated from Neenah High School in 1945. While in high school she began working at Kimberly Clark at the Lakeview Mill where she met her soul mate James Lockery who had recently returned from serving in World War II. They were wed on July 12, 1947. They were together through thick and thin until James passed on January 2, 2004.

Peggy worked for 29 years as a crossing guard for the Neenah Police Department, and in 1989 received the Key to the City in recognition for her many years of service. Many people, young and old, remember her on the corner of Cecil and Commercial Streets in Neenah. She always enjoyed running into adults who she helped cross those busy streets as young children. She also worked part time at the Schmitts/Copps Department Store and Morton's Drugstore where she made many friends.

Her family was always the most important thing in mom's life. Mom loved spending time with her family when she could; especially watching her grandchildren grow up. Mom was an animal lover and cared for them like they were her children. No matter how big or small the animal was, it would immediately go to her side as if kindred spirits. Her way with animals….and the additions to her home unexpectedly…. caused a bit of tension at times in the house but she wouldn't have it any other way.

Mom had a sense of dry humor and sassiness that we will always remember. Many of her grandchildren loved spending time with her as she recounted times growing up or dealings with people in Neenah – and each story had the trademark "Peggyisms" that we all came to love and look forward to. Many laughs were had with her telling her stories and those Sunday afternoons over coffee will be dearly missed.

Peggy also had many nieces and nephews who she cared deeply for. The family would like to thank all the wonderful neighbors who lived near her on Oak Street, Neenah, especially the Eric and Gina Larsen family. They helped us have some peace of mind knowing someone was close by to look after mom if necessary.

In addition to her parents and husband she was preceded in death by her daughter Kathy, grandson Jed Genett, Sister Jean Collins and others.

At her request a private ceremony for family will take place at a later date. She will be laid to rest next to her husband Jim at Greenlawn Memorial Park.

In lieu of flowers, memorial donations may be made to the Neenah Animal Shelter in Peggy's memory.

The Family wishes to thank the wonderful staff at Alten Haus Assisted Living for taking such loving care of mom. Mom, you will always be in our hearts. We love you.

"I will always have this piece of my heart that smiles whenever I think about you."