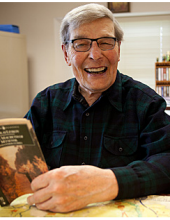 Richard “Dick” Yatzeck, loving husband and father, devoted professor and passionate hunter, died peacefully in Appleton, Wisconsin on March 7, 2019. After a full and adventurous life, he was 86.

Dick was preceded in death by his sister Sue Korb (and her husband Dave Korb), and parents Alvin Richard and Gertrude Blanche Yatzeck.

Born in Waukesha, Wisconsin in 1933, Dick's youth was forever transformed by the years he spent on Art and Leda Bloom's farm in nearby Genesee. Leda introduced him to the magic of Mark Twain, while Art and his sons taught Dick the values of farm life and the even more thrilling pleasures of hunting and fishing. His love of learning also began nearby at the Genesee School, where he attended first through eighth grades. Following these years, he went on to earn his bachelor's, master's, and doctoral degrees, and although his warmest feelings were for the Genesee School, he was vastly pleased to be a graduate of the University of Madison and the University of Chicago. Dick was a German-speaking Fulbright Fellow in 1955 in Hamburg Germany, and was one of thirteen Americans accepted to a Russian exchange program in Moscow for nine months in 1961. These experiences fueled a lifelong passion for Germany and Russia.

Dick taught Russian Literature for 48 years at Lawrence University in Appleton, Wisconsin, from 1966 until 2014. The highlight of his career was the Russian trips he organized with colleague George Smalley. Every other summer beginning in 1969, they would take up to 35 students across Eastern Europe and Russia in a caravan of Volkswagen buses. Dick also led the Lawrence London program and the Associated Colleges of the Midwest (ACM) Russia program in Krasnodar twice, in 1991 and 1997. His experiences abroad formed the basis of his second book, "Russia In Private", published in 2012. Dick repeatedly stated that no day at Lawrence ever felt like work, as he loved teaching and learning from his students.
Dick's second (perhaps first?) love was hunting and fishing.

He spent many happy afternoons with close friends and follow professors Peter Fritzell and Michael Hittle chasing the elusive Hungarian partridge. On the best of those days, he was accompanied by Pyos, his beloved springer spaniel. Thanksgivings were for hunting whitetails at Dennis Smith's farm. These experiences formed the basis of Dick's first book, "Hunting the Edges”, published in 1999. To Dick, hunting was perhaps most importantly a way to retreat from modern civilization and return to the undeveloped rural areas which he loved as a boy.

Dick passed along his love of literature to his children, spending countless hours reading aloud to them in their youth and patiently explaining that characters are not purely good nor bad, but that all of us are a mixture of both - gray. Even in the last weeks of his life, Dick never lost that desire to teach. He also maintained his quick wit and the mischievous sparkle in his eyes. He will be missed.

In lieu of flowers, please consider making a donation in memory of Dick to Feeding America Eastern Wisconsin (feedingamericawi.org, 414-931-7400). Dick's family would like to thank Willow Lane Assisted Living and Compassus Hospice for their loving care.

A celebration of his life will be held on June 15th from 1:30 PM until 3:30 PM at Lawrence University in the Main Hall Strange Commons.
To order memorial trees or send flowers to the family in memory of Richard "Dick" Yatzeck, please visit our flower store.