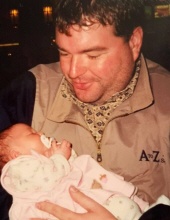 Richard is survived by his daughter Cassandra Knight, his mother Delphine Knight, brother Tom Knight, sister Jan (Bill) Thiel, and several nieces and nephews. He was preceded in death by his father John Knight, and brothers Randy Knight and Dan Knight.

Richard was born in Neenah on September 8, 1967, to Delphine and John Knight. At the time of his passing, he was the proud owner of Auto Connection in Appleton, and of and several other car lots in the past. He was also proud of employing his only daughter - Cassandra for the remaining three years of his life.

Richard was a devoted father who was willing to do anything for his daughter and those he loved. He enjoyed traveling, vacationing in Door County, and Inherited in his families love of cars. He will be deeply missed by his friends, family, and all who knew him.

There will be a small family gathering planned at a later date in celebration of Richard's life.

In lieu of flowers please consider making a donation to Cassandra Knight at 2470 W. Glendale Avenue, Apt. F - Appleton, WI 54914.
To order memorial trees or send flowers to the family in memory of Richard Knight, please visit our flower store.