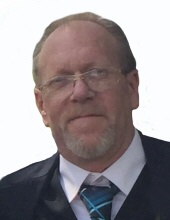 Rick Hanson “Hairball” passed away at St. Elizabeth Hospital following a brief battle with multiple health complications at the age of 57.
Rick enjoyed NASCAR racing and watching the Green Bay Packers and worked alongside his father at the family shop for many years. He enjoyed spending time at home in his basement which he referred to as the Hairball Hilton. Rick also enjoyed socializing at some of his favorite hangouts.

Rick enjoyed his pets and will be looking forward to reuniting with Mr. Wrinkles and several cats. He leaves behind his dog Lucy.

Rick is survived by his father David Hanson; daughters Amanda (Bob) Zeinert and his granddaughter Noralyn and daughter Lydia (Matt) Longmeyer and a new grandchild coming in January of 2022; his girlfriend Judy Steuber. a sister Kelly (Chuck) Neumann and their children Aaron (Morgan and Lane), Nathan, and Kameron, Uncle Chuck (Debbie) Hanson, niece Stephanie Lancour. lifelong friend Cary Eisch, and other by cousins and friends.

He was preceded in death by his mother Kathy, grandparents Floyd and Edna Hanson and Uncle Don (Shirley) Bartels and a special friend Tabitha.

No services are planned at this time.
To order memorial trees or send flowers to the family in memory of Rick E. Hanson, please visit our flower store.