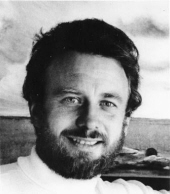 Robert (Bob) Edward McPherson Jr., a resident of Grand Chute, died on September 24, 2015, at the age of 80. He was born on January 29, 1935 and raised in Oshkosh, Wisconsin, the son of the late Robert E. and Eleanor Goetz McPherson, and grandson of the late Harry and Gertrude McPherson and the late Philip and Anna Goetz. He attended Oshkosh High School and was a graduate of Wayland Academy in Beaver Dam, Wisconsin. In 1957 he graduated from Ripon College with a degree in economics. He was a member of Sigma Chi Fraternity. In 1960 he married Sara (Sally) Spicer in Oshkosh.

At a very early age, Bob developed two loves: sailing and singing. From the age of 15, he sailed his beloved Snipe in area lakes, and crewed for other boat owners in regattas. He was a member of the Oshkosh Yacht Club for many years and later also a member of the Neenah Nodaway Yacht Club.

In 1949 he began singing in a barbershop quartet and went on to perform in high school and college at various shows and concerts. Following college, he performed as a baritone with the St. Louis Civic Opera, on television and with the St. Louis Municipal Opera Company, where he appeared with Bob Hope, Andy Devine, Margaret Hamilton and Alan Jones, among others.

He and Sally moved to Miami in the early 1960s where he sang with the Miami-Dade Opera companies and other major companies in Florida, Including Tampa and the Florida State Symphony. He was a founding singer in the Palm Beach Opera Company. He appeared with many singers, including Placido Domingo, Licia Albanese, Salvatore Bacalonni, Ferruccio Tagliavini, Richard Tucker, Robert Merrill, Heidi Krall and Teresa Stratas.

After moving to New York City, he received a full scholarship to complete his Master's Degree at the Manhattan School of Music. He eventually dropped out of the program because he was given roles that were unsuitable for his voice range. He later changed his voice from baritone to tenor and toured with the then Guber, Ford and Gross "Straw Hat Trail" in their east coast productions of Camelot and Oklahoma, appearing with Gordon MacRae, Earl Wrightson, Lois Hunt, Bill Hayes and Roderick Cook.

He performed with a number of east coast opera companies, including Stamford Opera, the Connecticut State Opera, the Garden State Opera of New Jersey, the Long Island Opera Showcase Theater, the DaCapo Opera of Cape Cod, the New York State Opera Company, the Apollo Opera Company of New York City, the New Haven Opera Society, the Ruffino Opera Association of NYC, the New Rochelle Opera Company, and the Monmouth Opera Festival of New Jersey. He made a number of guest appearances, including the Westchester Conservatory of Music, the Pelham Symphony Orchestra, and the Performing Arts Society of Westchester County. He sang with the Metropolitan opera chorus for almost ten years.

Bob retired from singing professionally in the mid-1990s, and in 1997 he and Sally returned to Wisconsin. The lure of boats never left Bob, and in the early 1970s, in addition to singing,
he opened a business as an independent contractor performing cosmetic and structural fiberglass repairs to boats. Following the move to Wisconsin, he continued his business in the Fox Valley area as well as singing at area churches and for special events.

Bob was a member of All Saints' Episcopal Church in Appleton, Wisconsin.

He is survived by his wife: Sara of Grand Chute; his son: Robert of New Rochelle, New York; his sister Beth (Bob) Ruger of Franklin, Wisconsin; his brother: James (Lynn) McPherson of Bremerton, Washington, and several nieces, nephews, and many cousins.

At Bob's request, no flowers, but memorial donations may be made to All Saints' Episcopal Church of Appleton, Wisconsin, or to a charity of the donor's choice.