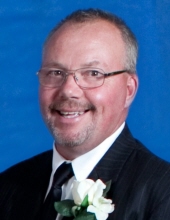 Princeton-Robert Daniel Guenterberg, age 55, went to be with our Lord and Savior on April 2, 2020. He was born at St. Joseph’s Hospital in Hartford, WI on May 25, 1964 to the late Robert Daniel Guenterberg Sr. and his wife Diane (Spittel) Guenterberg. Bob was a graduate of Hartford Union High School class of 1982 and also attended classes from 2000 to 2002 at MATC in the Supervisory Management Program. In 1982, he was a member of the United States Army from February to August receiving an honorable discharge.

From 1984 to 1988, Bob was employed as a route driver with Pepsi through Rockford, IL. He then moved back to WI where he worked again for Pepsi for a time, then was employed as a route driver for W.O.W. Miller Beer Distributing. In 1997 Bob injured his back while working and became disabled. Bob struggled with chronic pain and through the years had to undergo many surgeries.

On June 25, 1994, he was united in marriage to the love of his life, Debra (Helmer) Guenterberg. Through the years he and his wife shared many happy memories and were always working together on some project. They both loved to be outside and enjoyed canning vegetables together they grew in their garden. Bob's favorite sport was hunting. He and his hunting pals shared many funny stories and adventures over the years. His little furry pets were a joy to him and his little “Tia” was his best pal. His children knew he cared and tried to do his best as their dad. If they ever needed directions to somewhere, he could always tell them the best way to get there. Bob’s grandchildren will always remember how grandpa loved to go watch them play sports or throw a ball back and forth to them. Bob’s laugh, his smile and how he was always willing to help his family and friends will also be remembered.

Robert was preceded in death by his father Robert D. Guenterberg Sr., his brother-in-law Wayne Colbert, his first wife Tina Guenterberg, his father-in-law Kenneth Helmer, and his sister-in-law Dianna Straseskie.

He will be deeply missed but will live on in the hearts of those he knew and loved.

Matthew 11:28-30
Come to me, all you who are weary and burdened, and I will give you rest.
Take my yoke upon you and learn from me, for I am gentle and humble in heart, and you will find rest for your souls. For my yoke is easy and my burden is light.

Due to the order prohibiting mass gatherings of 10 people or more that has been issued for the State of Wisconsin, a memorial service will be held at a later date.
To order memorial trees or send flowers to the family in memory of Robert D. Guenterberg, please visit our flower store.