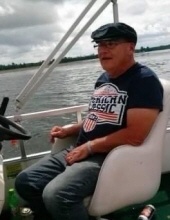 Robert (Bobby) M. Forbes, age 62, passed away unexpectedly on Tuesday, January 11, 2022. He was born on January 1, 1960, to Robert H. and Lorna Forbes, in Fon du Lac, Wisconsin.
Bobby attended Neenah High School and graduated in 1978. In 1979, he married his high school sweetheart, Kim Martino. Though they later divorced after 39 years of marriage, they remained close friends. Bobby’s happiest times were spent fishing, boating, and camping on Shawano Lake, where he had a permanent campsite for over 25 years. He was a very giving person, helping anyone in need.
He cherished his grandchildren, as well as his great niece and nephew, Emily, and Edward Gwinn.
Bobby was previously employed at Oshkosh Corp.
In addition to Kim, Bobby leaves behind his five children: Michael (Jennifer) Forbes, Debra (Dale) Tiedemann, Scott (Heidi) Forbes, Kimberly Forbes, and Steven (Stephanie) Forbes; grandchildren: Samuel Forbes, Nathan Forbes and Adelyn Forbes. He is further survived by his mother, Lorna Forbes; five sisters: Barbara (Greg) Warner, Judith (Richard) Essmann, Kathleen (John) Julius, Susan (William) Steffen and Mary (John) Kriz as well as numerous nieces and nephews. He was preceded in death by his father, Robert and two grandsons: Nicholas Forbes and Benjamin Tiedemann.
A special thank you to our sister Kathleen Julius for caring for him the last several years of his life.
A private celebration of life will be held at a later date.
To order memorial trees or send flowers to the family in memory of Robert M. Forbes, please visit our flower store.