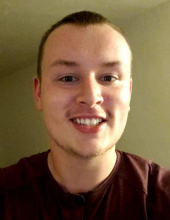 Rodger was born on April 21st, 1998 to Amber Ridgeway in Watertown, New York, moved Neenah, Wisconsin about six years ago and should have celebrated his 23rd birthday just few days ago.

A Celebration of Rodger's Life will be held at a date to be determined.

Rodger graduated from Neenah high school and was currently enjoyably employed at Trilliant in Little Chute.

Among the people to be credited with helping Rodger Cole Ridgeway become the caring person he turned into are Menasha school district teachers Mr. Aristotle Peters and and Mr. Christopher Castonia. He would contact them frequently to just to find out how they were doing.

Rodger (or Cole as his mom and godfather called him) would call them often. Often it was three times a day to share how work was going, his latest great idea or just to find out how they were doing.

Rodger was like that with his friends as well.

Those calls are already missed as we wait for the phone to ring and see his name pop up.

Rodger would go out of his way to make friends with people. One of his co-workers at a previous job was from Africa and Rodger, to make communication easier, decided to learn to speak Swahili so the two of them would have more in common. The two became fast friends.

Rodger would go out of his way to help his friends. Need a ride? Hop in. Hungry? I'm buying.

Rodger's great grandfather Carl was a World War II veteran who believed that heroes were people who acted heroically, going above and beyond what is expected while not expecting anything in return.

In that way with how Rodger loved and willingly helped his friends whether the need was great or small, Rodger, too, was a hero.

Rodger, please know that as you look down from heaven, our hearts are broken that you left us so soon and tears are flowing like a river.