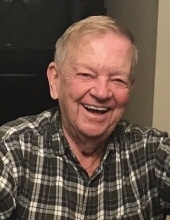 Roger L. Lovedale, 82, passed away on Sunday, December 19, 2021, at his home in Neenah with his family by his side. He was born on August 10, 1939, in Marinette, the son of LeRoy and Myrtle (Anderson) Lovedale. He attended the University of Wisconsin-Madison, graduating with a Bachelor's degree in Mechanical Engineering. He was employed by American National Can, retiring in 1998. Roger was united in marriage to Sharon Bashford on September 19, 1964. Roger most enjoyed spending time with his family along with golfing, gardening, carving, wood turning, and winters in Naples, FL.

Roger is survived by his wife, Sharon; children: Michael, Laurie, and Mark; grandchildren: Alexandra and Carson; sister: Arlita Koerner; and many nieces and nephews.

A celebration of life for Roger will be held at a later date. Memorials can be made in Roger's name to the charity of your choice. To express condolences or for additional information, please go to Roger's page at hovcremation.com.
To order memorial trees or send flowers to the family in memory of Roger LeRoy Lovedale, please visit our flower store.