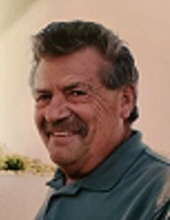 Menasha – Ronald John Hartzheim, 79, of Menasha, passed away unexpectedly on Wednesday, October 9, 2019. Ron was born in Neenah, Wisconsin, on July 22, 1940 to the late Edward and Alvina (Blair) Hartzheim.

Ron proudly served his country in the US Army in the Howitzer Battalion 11th Artillery from 1957 to 1960. He was a skilled painter for over 60 years and was the owner of his own business. Ron and his wife also owned and operated Chef Fresh Pizza in Menasha for five years, until the time of his retirement. He then delivered Meals On Wheels for several years.

Ron was an avid Green Bay Packer and Milwaukee Brewer fan, and in his younger years Ron liked to throw back a few cold ones and crank up some Country & Western music on his Magnavox console stereo or play a tune on his harmonica. He later decided enough of the cold ones and traded that in for trips to the casino, including Vegas and other family trips, especially to the Outer Banks. When Ron was introduced to the modern day IPad he started playing slots on it; you could hardly get his attention. He was certainly the type of person that would go without, getting more satisfaction seeing others around him having what they needed. He was quick witted and would often leave you with a confused look on your face while he laughed and had a smile on his. Ron truly made the world a better place, he had a good life, and will be missed by all who knew and loved him.

Ron was preceded in death by two brothers, three sisters, and his granddaughter Shannon Eick

A Celebration of Life for Family and friends will be held at Waverly Beach Bar & Grill, located at N8770 Fire Lane 1, in Menasha on Saturday October 19, beginning at 11:00 AM. Full Military honors will be performed at 2:00 PM.
To order memorial trees or send flowers to the family in memory of Ronald J. Hartzheim, please visit our flower store.

Full military honors will be performed at 2:00 PM