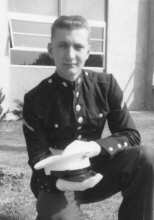 Ron Poleshinski passed away on December 1, 2015, at his residence; he had been a ten year cancer survivor having his left lung removed in 2005 at the Milwaukee VA Medical Center.

Ron was born on December 22, 1942, in Oshkosh to the late Edward and Julia (Gerritts) Poleshinski. Ron was a 1961 graduate of Kimberly High School, while in high school he played football, basketball, and ran track. After high school Ron served his country as a proud member of the U.S. Marine Corps until 1964 when he returned home and joined the Combined Locks Fire Department as a volunteer, during this time he also completed training at St. Elizabeth Hospital which led to certification on the national and state level as a licensed EMT. Ron worked for 38 years with I.B.E.W. Local 577 in Appleton beginning with an apprenticeship and ending as a master electrician. During this time he also served as an officer of the local for many years. Ron always took great pride in his work.

In his spare time Ron enjoyed dancing, hunting, fishing, and was a huge Elvis fan. He also had a great sense of humor which was enjoyed by many and some not so much. In the winter months he enjoyed doing jigsaw puzzles, watching football games especially the Packers, and watching NASCAR rooting for Danica Patrick. In the summer he enjoyed working in his yard and took great pride in keeping it green and groomed. When the yard work was completed a cold beer on the yard swing was a well-earned reward. Dining out with his wife Patty was enjoyed year round and this also allowed him to meet new people.

Ron spent eight years getting to know his wife before they married on October 5, 1992, he felt that some things just can't be rushed and getting to know each other was important.

Ron is survived by his wife Patty; daughter, Kristin (Brad) VanSchyndel; stepsons, Michael (Diane) Leith, Matthew (Michelle) Leith; and sister, Mary Oudenhoven. Ron was a proud grandpa to five grandchildren and five step-grandchildren. He is further survived by his wife's family; Marlene (Lyle) Long of Wittenberg, Nancy (Jim) Maahs of Pearson, Becky (Mike) Mader of Menasha, Teena (Gary) Lutz of the town of Menasha, Butch (Alice) Hintz of Appleton; many nieces, nephews, aunts, uncles, other relatives and many friends who were there when he needed them.

Ron would like to thank everyone who helped him through all this, especially his good friends Don Rogulski, Jack Kelly, Char and Mark Bootz, Terry and Alice Grogan, and Jack and Karen Liebergen. He also wishes to thank Patty for 30 years of love and laughter, his daughter Kristin, step-sons Mike and Matt and their spouses for always being there.

Ron will be greatly missed by all who knew and loved him. He would like everyone to remember him in their own individual ways. Ron asked that formal funeral services not be held, however, there will be a celebration of Ron's life held at a later date. Online condolences can be offered at www.hovcremation.com.