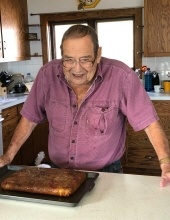 Russel Shafer, age 96, passed away Wednesday February 24 at home
with family by his side.

Russel was the son of Elmer and Margaret Shafer, born on December
8th 1924. His early life was spent in the Rosendale area living and
working on the family farm.

He proudly served his country in the United States Navy participating
in the D-day battle, Battle of Okinawa and the Battle of France during
World War II. He had many stories to tell. After leaving the Navy he
enlisted in the US Coast Guard where he served on the Great Lakes.
Russel participated in an Old Glory Flight to Washington DC which
was a highlight in his life .

After his military service he moved back to the Oshkosh area where
he met the love of his life, Fern Jungwirth. They married on April 10,
1952. Russel went to work for the Milwaukee Road Railroad working
as a freight train conductor for the next 37 years. He also enjoyed
playing cribbage and reading. He was an avid Green Bay Packer fan
and enjoyed spending time with his family, hosting Sunday dinners at
his lake home. . He also enjoyed spending time with friends and
neighbors sharing the many stories of his life.

We will have a celebration of life when the weather warms so we can
enjoy the outdoors as dad did.

Dad, You may not be with us any more but we will cherish and love
the memory of you forever.
To order memorial trees or send flowers to the family in memory of Russel E. Shafer, please visit our flower store.