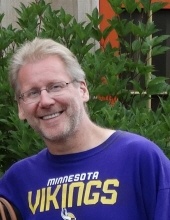 Russell Peterson Lading was taken much too soon, at age 54, on August 24, 2020. Russ was born on May 31, 1966 in Albert Lea, Minnesota and graduated from Menasha High School in 1984. His senior year, he embarked on a life changing trip as a foreign exchange student to Indonesia. He studied economics and mathematics at the University of Wisconsin Whitewater and worked as a pension actuary for several years.

He leaves behind his father, David Lading; daughter, Madeline (Jared) Jahnke; a sister, Allison Neilsen, nephews, Sean and Troy, and niece, Zoe; a brother, Christopher Lading and family; an aunt, Marilyn (John Horrigan) Lading; a cousin, Michael John Horrigan; an aunt, Judy (Bill) Hoxmeier; and his ex-wife and friend, Marianne Wenda. He also leaves behind his furry companion, Scooby. He was preceded in death by his grandparents, Bill and Esther Lading, and Pete and Audrey Peterson; his mother, Diane Lading; and his father and mother-in-law, Arthur and Theresa Wenda.

Russ found comfort in Buddhism, and was always in pursuit of learning and knowledge. He enjoyed playing guitar, writing, music, computers, reading, and nature. He was an avid Minnesota Vikings fan. He found great joy in spending summers at the family cabin in Lutsen, MN. Those close to him knew that he always endeavored to be a better father, son, uncle, brother, and friend. He was generous and thoughtful, and delighted in finding just the right gift for every person at Christmas and birthdays. Our gatherings will never be the same and his presence will be dearly missed.

He strived to live by these four agreements, written by Don Miguel Ruiz: “Be impeccable with your word, don’t take anything personally, don’t make assumptions, and always do your best.”
To order memorial trees or send flowers to the family in memory of Russell P. Lading, please visit our flower store.