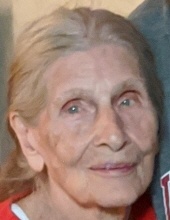 Ruth V. Freeman, 96, of Appleton, WI, died Thursday, January 7, 2021. She was born January 11, 1924 in Beloit, WI, the daughter of Carl and Verna Studey Ultsch. Ruth was a 1942 graduate of Beloit High School. Ruth married Robert V. Freeman on October 4, 1947 in St. John’s Lutheran Church, Beloit, WI. Ruth was employed as a secretary by a church and the local Union chapter before having children and becoming a homemaker. But her life was far from ordinary. Early on, she became a vegetarian and in her early 40s she started to do yoga. She soon adopted a meditation practice also. She was a woman ahead of her time. She applied her innate artistic talents to making beautiful May baskets with her children and campaign posters for her daughter when she ran for junior high school student council. As a senior citizen, Ruth took pride in becoming an art student at the University of Wisconsin-Rock County. She excelled and became an accomplished oil painter, leaving her many works for her family to cherish. She was also an accomplished baker, especially known for her apple crumb pie. She was fun-loving and enjoyed a good laugh but she was always insightful with her guidance and words of wisdom. Ruth lived an independent life into her 90's before finding a home with her loving daughter Sara until she fell and broke her hip in October 2020, which brought her to Helen’s House. She will be remembered for her dancing (yes, even with a tutu on), playing with her grandchildren, even sledding down Hospital Hill in her 80s with them, riding her bicycle at 85, and walking her 3.2 miles daily for years. She is our beacon of love and kindness.

The family has chosen private remembrances of Ruth and no formal services will be held. The family wishes to extend a special thank you to Ryan Calmes and his wonderful, loving staff at Helen’s House, who cared for Ruth during the last few weeks of her life.
To order memorial trees or send flowers to the family in memory of Ruth V Freeman, please visit our flower store.