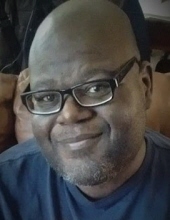 Shahid Jacoby Smith, 43, died unexpectedly on Saturday, November 20th, 2021 as his life was cut short from complications related to Covid-19 and a long battle with kidney disease.

He was born on June 23rd, 1978 in Rochester, New York the son of Derrick J. Beaman and Barbara A. Tate. Married Jennifer (Selig) Smith on June 27th, 2009 at the flower gardens in Kenosha, WI.

He was a man of many skills with his unquenchable thirst for learning new things. Shahid was never afraid to adapt to a different job. He was always aware he’d take that knowledge and apply it to other things. Shahid was always ready to share his wisdom. When people would confide in him about their problems, he always had a catalog of ideas of how to look at the problem and what you could do about it. Which brings us to his first love, the people in his life. Anyone who had the privilege to sit and talk with Shahid quickly realized he was easy to talk to and he never was one to pass judgement. He could light up your world with his smile and push the gray skies away with his jokes. The kind of humor that could make you genuinely laugh so hard that your side would start to hurt. That’s when he would give you a hug that simply felt like home. Shahid was not only intelligent but wise beyond his years. He could spend hours talking about a million different subjects as long as someone was willing to listen. Shahid’s love for people and learning flowed into his cooking. His cooking became more than just an everyday task when it became an adventure to see what he could come up with and if it would be enjoyed by his company. Shahid will be remembered as larger than life to most of us. He had the privilege on April 17th, 2021 to dedicate himself through water baptism to his heavenly father, Jehovah God. Shahid enjoyed reaching out to his community on a weekly basis to share the good news as a Christian volunteer. This message was especially dear to his heart when he was able to connect to those with health issues like himself but were searching for hope.

A Zoom memorial will be held by his local congregation at 3:00 pm on Sunday, December 12th, 2021. There will be a photo slideshow starting at 2:45 pm as individuals make their way into the room in hopes to keep everyone safe as the pandemic continues.
To order memorial trees or send flowers to the family in memory of Shahid Jacoby Smith, please visit our flower store.