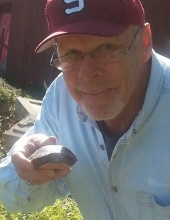 Stephen Jay Cox, 81, of Appleton, WI and Dunedin, FL, passed away on March 17, 2022 after a long illness.
Born on October 6, 1940, Steve was the youngest of 4 children. He attended Broad Ripple High School in Indianapolis, where he was on the football team, played the trumpet, and was an Indiana State Wrestling Champion. Steve liked to tell stories about his wild youth, and about how it led him to follow his dad’s suggestion to join the US Army after high school. After being honorably discharged from the Army, Steve received a football scholarship to Southern Illinois University in Carbondale, IL, where he graduated with a degree in Business Administration. While in college, Steve met and married the love of his life, Grace Provenzano. Steve enjoyed a long career in sales, working for Eli Lilly, Dow Diagnostics, and Dow AgroSciences; interacting with people from a variety of backgrounds was his favorite part of the job, and he also won many sales awards. After retirement, Steve worked as a substitute teacher in the Appleton area, until he and Grace began spending winters in Florida. Steve was an active member of AA for over 35 years and made many friends through his involvement in volunteer activities connected with recovery. Steve and Grace were married for 60 years and had 3 children, 10 grandchildren, and 3 great-grandchildren. Steve was known for his love of dogs, watches, turtles of all kinds and, mostly, for his love of family. Steve enjoyed nothing more than to be surrounded by close family members, and to have family and friends from out of town come to visit. He was a nurturer, always there to care for family when they were ill, he was generous to his dogs, and he always made sure there was food in the bird feeders. Steve kept up a daily routine but was always willing to break it for an interesting diversion! His family knew him as an open-minded, open-hearted man with a good sense of humor, and a great dad laugh! He was as comfortable spending time alone in quiet thought, watching the birds, as he was engaging in vibrant conversation about almost any topic. A man like this, a kind man, who loves well and is well-loved, is a blessing on the earth whose spirit lives on in those who knew and loved him. We will miss you, Stephen Jay Cox…one day at a time.
Steve is preceded in death by his parents, Roland and Charlotte Cox, and Gertrude Cox, his brother Jimmy, his brother David, and his granddaughter Casey.
Steve is survived by: His wife Grace; his children Julie (Lori), Don (Trudy), and Joe; his sister Susan Wolfe; his grandchildren Greg Stockwell (Amanda), Andrew Stockwell, Maggie Filipiak (Caleb), Emma Cox (Christian), Charlie Cox, Sam Cox, Ellie Cox, Megan Evans, Ashley Evans; his great-grandchildren Lennon, Tommy, and Jackson; beloved relatives and friends Anita Povich, Mark and Sally Rajcevich, Dave and Tracy Stockwell, Jenny Cox, Vicki Hodgkiss, Cathy Perryman, and many other nieces and nephews.
Memorials in Steve’s name may be given to Colonel Potter Cairn Rescue Network https://www.cairnrescue.com/donate/
Burial services at St Joseph’s Cemetery in Appleton, at a date and time yet to be determined.
To order memorial trees or send flowers to the family in memory of Stephen Jay Cox, please visit our flower store.