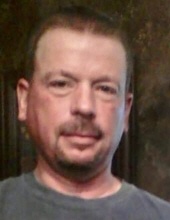 After a courageous battle with cancer, Steven A. Krasavage of Omro age 58 passed into his
eternal home surrounded by his loved ones on Friday, February 12th, 2021. Steve was born
June 27, 1962 in Tigerton, WI to Donald and Vivian Krasavage. He married his wife, Erika
(Piezker) Krasavage on May 15, 1992. Steve was the owner of Krasavage Drywall and Paint
for over 30 years. He has done hundreds of homes in the local area with great success and
pride. He applied his artistic creativity to his work.

Steve was an avid fisherman and hunter. He loved nature and being outdoors. He enjoyed the
beauty of nature. It was there that he found peace and tranquility. He caught a 56” musky close to home by himself. He would never give up his fishing spot even in his last week of life.
The Pastor came to visit and he would not tell him either. That was Steve! He shot numerous giant bucks throughout his lifetime. He enjoyed his trips to Canada and North Dakota with his boys and friends. He worked hard and played hard. He had a great sense of dry humor. The one liners just rolled off his tongue. He loved to banter with people.

Steve was a wonderful husband, father, son, brother and friend. He loved spending time with his kids and family. He was especially grateful to share 2 years with his loving grandson, Jagger. They had a wonderful bond laughing and playing together.

We would like to extend our deepest appreciation to the medical team that provided excellent
and kind care during the past five years including: Dr. Batley, Dr. Klinkhammer, Dr. Maes and
his favorite nurse, Tonia all with ThedaCare Berlin.
To order memorial trees or send flowers to the family in memory of Steven A. Krasavage, please visit our flower store.