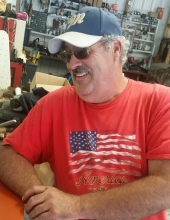 Steven Paul Berben
Stockbridge - Steven P. Berben, 61, passed away peacefully on Wednesday, December 15, 2021, at his home with his family at his side. He was born on April 28, 1960, in Appleton, the son of the late Patrick and Marianne (Spierings) Berben. He was a graduate of Holy Angels Grade School, and Kimberly High School in 1978. Steven worked at the Kimberly Paper Mill for the majority of his life. He then ran his own limousine service, Celebrity Limousine LLC, for 5 years. Since then he has been retired.

Steven will always be remembered for being strong-willed, having a massive heart, and his comical nature. He had a passion for metal artwork, fishing, and watching home movies with his children.

Steven was preceded in death by his siblings, Sally Berben, Marty Berben, Dan Berben, and infant brother Joseph Berben.
Celebration of life will be announced at a later date. Steven's family would to extend a sincere thank you to the physicians, nurses, hospice caregivers, and his many friends who comforted him during these past few difficult months. Condolences may be sent to the Berben Family at 3921 E Appleview Dr, Appleton WI 54913.
To order memorial trees or send flowers to the family in memory of Steven Berben, please visit our flower store.