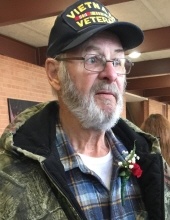 Thomas Lund Holm passed away on June 16, 2019 at ThedaCare Reginonal Medical Center, Neenah, WI. He was born in Oshkosh, WI on December 14, 1946. Shortly after high school Tom enlisted in the Marine Corps and served in Vietnam from 1966-67. After an honorable discharge, he attended tech school for truck driving. He drove for various truck companies and ended his career at Roadway Express in 2005. His many activities included deer, duck, and pheasant hunting along with musky fishing, cribbage, sheepshead, and billiards. He also enjoyed making wood projects for around the house including a riverboat, an Amish buggy, and a windmill. Tom, aka “Too Tall Tommy,” had many more nicknames, a great sense of humor, and will be greatly missed.

He was preceded in death by his parents, a brother Allan, and a sister Jane.

A graveside funeral will be held at 11:00am on Saturday, June 29, 2019, at the Borth Cemetery in Borth, WI. Visitation will be at Tom and Lynn’s home following a salute by the Veteran’s Honor Guard.
To order memorial trees or send flowers to the family in memory of Thomas Lund Holm, please visit our flower store.