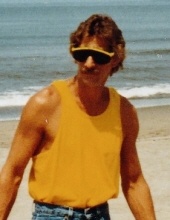 Todd M. Wolfgram “Wolfy”, 58, of Appleton, passed away on June 9th, 2021, at home.
Todd was born in Appleton to James & Patricia (Mix) Wolfgram on April 10, 1963. He graduated from Appleton West in 1981. He worked in the construction industry as a concrete finisher most of his life. He was a very hard worker, but when he was not on the clock; he enjoyed life to the fullest and did not let any grass grow under his feet.
He was married in Sept of 1996 to Lisa Coenen, they had two children together. Whitney and Wyatt were his pride and joy, he was a devoted father. He enjoyed playing catch, camping, swimming, playing games and watching movies with his children.
Todd is preceded in death by his parents, James and Patricia (Mix) Wolfgram, his nephew John Wolfgram and his grandma Della.
Todd is survived by Whitney & Wyatt Wolfgram and their mother Lisa Burton (Wolfgram, Coenen); brother Tim (Julie) Wolfgram; Sisters Pam (Peter) Yonts and Nancy Kerns. Along with several other family members and friends.
Memorials are being accepted to help cover funeral expenses at Community First Credit Union. Checks can be made out to Whitney Wolfgram with “Todd memorial” on memo line and mailed to Community First Credit Union, PO Box 1487, Appleton, WI 54912-1487
The family of Todd wishes to extend our sincere thanks to Crystal and Tara from Pillars.
A Celebration of Todd’s life will be held Saturday, July 24 at Kiwanis Park in Appleton from 1:00 PM to 4:00 PM.
“Your fight with the demons is over, may you rest in peace. Forever in our hearts”
Love Whitney, Wyatt, Lisa, Nancy, Pam and Tim.
To order memorial trees or send flowers to the family in memory of Todd M. Wolfgram, please visit our flower store.