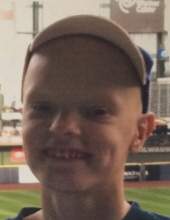 Travis Joseph Wilkum died unexpectedly at his home in Oconto, Wisconsin, late Friday evening, May 19, 2017. Those that had the privilege of knowing Travis understand how deeply he will be missed. Travis had an unquenchable thirst for life – from the most menial task to his first Brewers game – he squeezed out the absolute most from anything put in front of him. Travis had many “loves” in his life, primarily Wisconsin Sports. But he would also watch anything from synchronized swimming to soccer. He was on Cloud Nine anytime a game was on. Travis also had an incredible love for people. He could make anyone’s day better with his smile. His enthusiasm was contagious, he was never in a bad mood unless the Brewers lost, be he even quickly got over that. Travis was one of the most loving and caring people many of us have ever had the chance to know. We all must remember that sometimes the light that shines the brightest, also burns out the quickest.

Travis is survived by his father: Steve Wilkum; a brother: Joshua Wilkum; paternal grandparents: Leslie and Mary Wilkum; and many aunts, uncles, and cousins. He was preceded in death by his mother: Terri Wilkum, and an aunt: Kim Wilkum.

Friends and relatives are invited to gather to remember Travis on Sunday, June 4, 2017 from 2:00 PM until 5:00 PM at Fox River Baptist Church, 2700 E. Henry Street in Appleton. In lieu of flowers, the family is requesting contributions to assist with expenses.

Travis’ family would like to thank the Rem Wisconsin Allied Court staff and the Oconto High School Staff. We will never forget the kindness you have shown to our family.
To order memorial trees or send flowers to the family in memory of Travis Wilkum, please visit our flower store.