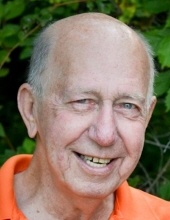 Walter F. Schaefer, age 78, of Menasha, passed away peacefully with his daughter by his side on Sunday, October 11, 2020. He was born to Raymond and Martha Schaefer on November 7, 1941 in Milwaukee, WI. Walter joined the United States Navy in 1964 as an equipment operator. After the Navy he continued working as an equipment operator until he retired in 2005.

Walter enjoyed spending time with his daughter and most of all his grandchildren. He enjoyed going on adventures with them, and traveling with them to Disney World. He also enjoyed going to Packer games, Brewer games, and the casino with his friends.

Walter is survived by his daughter Genifer (Doug) Schaefer; brother: Raymond (Darlene) Schaefer; sister: Margaret Beck; grandchildren: Aaliyah, Gerald, Emily, and Autumn Schaefer; nieces and nephews, other relatives, and some amazing friends. He is preceded in death by his father Raymond Schaefer and his mother Martha Schaefer.

A full military honor will be held at 11:00 AM on Friday, November 6, 2020 at King Veterans Cemetery, N2665 County Rd QQ, Waupaca. Due to covid we are asking that you wear a mask even though it will be outside. In lieu of flowers, a memorial fund is being established.

The family would like to thank the doctors, surgeons, nurses, and staff at St. Elizabeth hospital; with a special thanks to Alison and Derek. We appreciated all you did for him while he was there. Also a special thanks to Mary with Advocate Aurora Health for putting up with us for the last few months
To order memorial trees or send flowers to the family in memory of Walter F. Schaefer, please visit our flower store.