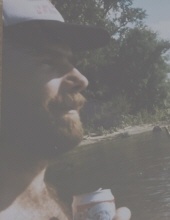 William (Bill) Dee Oettinger died at Bishop’s Court Hospice on May 17, 2021 in Allouez, WI due to numerous complications. He was 60.

William was born on February 17, 1961 in Antigo, WI to his parents, Garner and Patsy Oettinger. William was a patient and caring man. He loved music and having a good time.

When not working in the meat industry, he just loved “hanging out”.

Bill will be missed by those around him, especially his loving daughter Tricia Whitney of Pulaski, WI, his son Ryan Katers of Kenosha, and his brother Richard (Rick) Budnik of Slinger, WI.

William is survived by his daughter and son-in-law, Tricia and Adam Whitney of Pulaski, WI ; his brother Richard Budnik (Holly) of Slinger, WI; his sister, Deb Schenk (Steve); and two beautiful grandchildren Natalie and Mason, along with many nieces and nephews.

He is preceded in death by his father, Garner; and his mother, Patsy Knolle (Howerton).

William's wishes were to be cremated.
To order memorial trees or send flowers to the family in memory of William "Bill" Dee Oettinger, please visit our flower store.