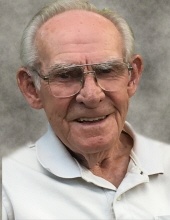 William “Bill” Leslie of Greenville, Wisconsin, passed quietly in his sleep after a prolonged illness on March 31, 2018. Bill was born on December 12, 1931, in Hillsboro, Ohio, to Hugh Leslie and Vivian (Burba) Leslie. He had a younger sister, Nancy (Leslie) DeVold and a stepmother Melva (Jones) Leslie.

Bill attended Boston Elementary School and Hillsboro High School and joined the Air Force as Air Police in 1951 and served in Ladd Field in Alaska for one year and served the remaining 3 years at Truax Field in Madison, Wisconsin. He married Donna Ortman in 1955 and the had two sons, Michael (1956) and Tony (1961). They divorced in 1961. In December of 1961 Bill remarried Carole “Fred” Gaines, Leslie from Rockville, Indiana, and adopted two children from Carole’s first marriage, Michael (1953) and Janine (1956). They had two more children; in November 1962, Brian and in March of 1964 Shellee. From 1961 to 1977 the family resided in Monona, Wisconsin. In 1977 they relocated to Appleton. After being discharged from the Air Force he went into banking which led to classes in insurance. He was employed with Integrity Mutual Insurance from 1967 until 1988, where his position upon retiring was Vice President - Marketing in the Appleton office. Upon retiring from insurance, both Carole “Fred” and Bill became real estate agents working for Century 21 in Appleton, retiring in 2002.

Bill and Fred became avid golfers and members of Grand View Golf Club in Hortonville in 1983. Any of their spare time they could be found at Grand View (or any course) honing their skills and cursing bad shots. Bill served as President of the Board of Directors at Grand View from 2004 until 2010, while Fred also served as recording secretary. Golfing quickly became their passion and they golfed on many leagues and when they were not on the course you could find them in the Clubhouse reminiscing great shots over an Old Fashioned.

Bill’s other great passion was collecting and restoring vintage Studebakers (with his and the families’ own hands) in his shop. He was a member of the Studebaker Drivers Club, Wisconsin Chapter where he served as president for several years. His restored cars that took several state and national awards.

Bill will be remembered as a man who would rather do a hard day’s work than relax, was meticulously organized and self-educated on a wide variety of topics, and was a man who never knew a stranger. He was able to turn a wrong number phone call into a half hour conversation and make a new friend. As his children, we will cherish the memories of the Sunday family road trips picking random roads and driving all day, stopping to get a loaf of bread, lunchmeat, chips and soda to have a picnic somewhere -all in the 1963 Studebaker Lark convertible, which was the family vehicle. We fondly recall the nights that mom and dad would get us out of bed just to walk in the snow because it was beautiful, the wonderful holidays we would get together at mom and dad’s to play games and do puzzles, laugh until we cried, enjoy wonderful food until we all needed naps, and wearing his “joke” Christmas gift of the pink and brown paisley shirt for every holiday. Bill’s “therapy” was mowing his 1 ¾ acres until it was perfect and looked as good as the golf course.

He is survived by son and daughter in law: Mike and Gail Leslie of Marshall, Wisconsin; daughter: Janine of Appleton; and a son Brian of Appleton. His grandchildren born to Mike and Gail are Travis, Audra, Danielle and Vanessa; his granddaughter born to Janine is Madison; his two beautiful grandchildren born to Travis and Lauren are Harlow and Celeste; and his daughter Shellee has already passed.

A Celebration of Life gathering will be held at Grand View Golf Club, date yet to be determined. He will be laid to rest next to Carole and Shellee at Union Cemetery in Hortonville in a private family ceremony.

The family would like to thank you all for the heartfelt sympathy, prayers and concern. You have been great support in our time of sorrow.
To order memorial trees or send flowers to the family in memory of William "Bill" Leslie, please visit our flower store.