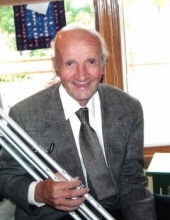 William (Bill) had a childhood that was filled with hard work. He was the oldest child of five siblings. Bill and his brother Ray keenly observed the process of how their Pa (Herman) invented a circular saw that was set up on their plot of land. It was used to cut lumber to build “the family home” or as Bill called it, “the shack”. There wasn’t much insulation in “the shack” and bitterly cold in winter, in fact, waking up in the morning, they could see their own breath! The Sears catalog was used as toilet paper in the outhouse! Bill and his siblings began searching for an underground source of water on the property, hoping to dig a well, they each held onto sticks, pointing them downward and walked back and forth without results. However, they later learned about this being a divination practice, disapproved of in the Bible along with many other superstitions that ma fully believed. For example, if someone dropped a fork or knife on the floor, Ma (Alvina) would tell everyone to step back, she excitedly asked in her German accent, “which direction is it pointing? Yah, company will be coming from that direction!” So, the family grew up in a home with many superstitions which they were freed from years later. They survived their childhood without running water for cooking or baths, instead, ma had the heavy chore of carrying water in pails from a nearby creek.

One day, while the family was sleeping up in the loft, a fire started from the wood burning stove and as the story goes, it was a cat that saved them by meowing wildly and jumping on ma until she woke up and immediately grabbed a sack of salt and dumped it on the fire! Bill had an appreciation for cats ever since.

Bill survived his siblings, Ray, Gertrude, Judy, and Edna. During the past decade he maintained a close relationship with his brother, Ray and sister Gertrude and her daughter, Diane, living in Colorado. He phoned daily with encouragement, sharing scriptures and humorous tales or advice on household or car repairs. Bill’s friends affectionately referred to him as “Bondo Bill” because he used Bondo in repairing and painting cars! He drove to the Gudex farm and had cars he was fixing up. He also was very talented at painting houses. Bill’s work ethics strongly influenced Diane’s brother, Greg, during his teenage years. Bill assigned him the hard work of prepping houses by scraping off the old paint, day after day. However, as an adult, Greg had developed a strong work ethic which he traced back to the years he spent working with his Uncle Bill and was forever grateful.

There was something more that motivated our Bill to work hard and care about people. It was during his childhood when a visitor came through their town and left Bible literature. Life took on new meaning after ma read what the Bible teaches and freed them from superstitions. They learned about God, that his name is Jehovah, which is an action verb meaning “He Causes to Become” and that the Kingdom is the theme of the Bible and needs to be preached throughout the whole earth.

Bill and his brother Ray were loyal to God’s Kingdom and thus imprisoned during WWII for being “conscientious objectors”. Bill was baptized in 1952 as one of Jehovah’s Witnesses’ and was a beloved member of the Fond du Lac congregation, pioneering since 1983.

He spent many years living with ma and was her Caregiver until 1984. However, in recent years, he enjoyed the friendship of Jason and Samantha Kubis, a young couple in his congregation. Essentially, they were his Caregivers and took a keen interest in Bill, although he was stubbornly independent, he considered himself blessed with their care. Jason and Samantha lovingly provided many different physical necessities, McDonald’s being of high priority, along with a Coke and seeing their beautiful smiling faces, they brought him happiness and kept him spiritually strong.

Bill was basically a simple man; with an endearing sense of humor, content with merely a radio to listen to the ballgames. He was cheerful, despite having been permanently disabled and using crutches for several decades. The cold weather was painful to his joints, although he rarely spoke of it. Bill endured by strengthening his arms, doing daily pushups. Also, daily Bible study to strengthen his resolve to continue telling people everywhere “This Good News of the Kingdom.”
He is sleeping now, soon to awaken in the earthly Paradise where we long to greet him with tears of joy… a young handsome Bill that smiles and says,
“I’m ready to work… but first a Coke!”

"The righteous will possess the earth and they will live forever on it."- Psalms 37:29 New World Translation
To order memorial trees or send flowers to the family in memory of William Schlueter, please visit our flower store.

There will be a Zoom meeting hosted by the Kingdom Hall in Fon du Lac, WI.A memory slide show will be shown beginning at 1:30pmPlease use the link below to access the meeting, and use the following passcode to fully enter the room. Passcode: 355408