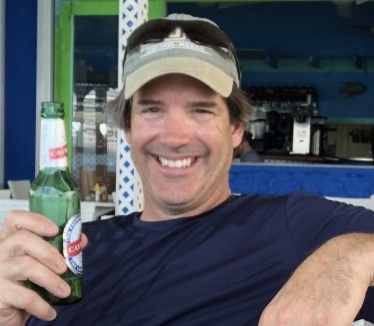 Alan Guido Porter ("Gov"), age 53, of Appleton, boarded the big, beautiful cruise ship in the sky on April 14, 2022, after a hard-fought battle against brain cancer.  Though it seems he left this Earth far too soon, he lives on in the countless lives and hearts he touched, having lived his life with passion, and wit, to the fullest.

Gov was born July 9, 1968, in Freeport, Illinois, to Robert and Aida Fiorentina (Gabborin) Porter, joining his siblings, Rick, Mike, and Lisa.  Most of his youth was spent on the family dairy farms in Winslow, Illinois and then in West Rosendale, Wisconsin. Though he would never deny that growing up on a farm was tough, he wouldn't have traded it for anything.  He beamed when telling any story about it, crediting every positive attribute of himself and his life to his upbringing, and especially to his dear parents, including the European values instilled in him from his mother and all his beloved Italian family.  He valued hard work, manners and respect, companionship, conversation, and loyalty - he would never let you down.

He graduated from Laconia High School in Rosendale, Wisconsin in 1986, and from the University of Wisconsin-Whitewater in 1990 with a bachelor's degree in business administration with emphases in finance and computer science.  In 1992 he was accepted into Officer Candidate School with the Marines, and trained in Quantico, Virginia, desiring to be a fighter pilot, until he was honorably discharged due to an injury.  He had a keen intellect, an eager curiosity, unparalleled intuition, and the quickest wit.  He defied "jack of all trades, master of none", as he seemed to be able to do, and know so much about, anything.  If he couldn't or didn't, he'd figure it out ("Look out!"), having a knack to "MacGyver" it, or as Gov would say, to "Bob Porter" it.  His professions were as diverse as his skills:  farmer, steelworker, McDonald's manager, truck driver, firefighter/EMT (including rescue diver, and Captain of Ripon Fire Department), master plumber (including his own business, Pipes Plumbing L.L.C., since 2007), and more.

In 2010 he met his wife, Whitney (Walesh), and they lived and loved their life and each other from one adventure to another.  Together they shared Gov's greatest joys, including travel, cruising, camping, live music, and just plain fun.  Whether plane/train/bus-hopping from one country to the next, escapading and high-rolling on (or scuba-diving under) the seas, air conditioning tents in Wisconsin's hot & humid August, spur-of-the-moment road-tripping, rocking out to Cherry Pie, wise-cracking and wrestling while cranking it out at job sites, thirsty Thursdays and golf and Vegas with the boys, bonfires and smores and marshmallow guns with the little ones (and not so little ones), and everything in between, he valued experiences over "stuff".  He loved to share his favorites (especially Italy and cruising) with as many friends and family as he could, delighting in the joy he saw on their faces and the memories created.  He enjoyed attending sporting and school events for his nieces, nephews, and stepsons, and then watching them grow up and begin their own lives and beautiful families.  He always made time to visit and contact family and friends, near or far.  He'd give you the shirt off his back if you needed it.  And usually left you with a smile on your face and a twinkle in his eye.

He was previously married to Denise (Malecki) Porter (Appleton), with whom he raised and loved numerous furry family members, including Pongo, Amadeus, Sandy, and Bella (who surely greeted Gov in heaven with doggie breath and kisses).

Gov's official diagnosis was grade IV astrocytoma (commonly known as glioblastoma multiforme). Despite its grim prognosis, those who knew Gov believed that if anyone could overcome the odds, it was him.  Though this horrible disease robbed him of so much, he never lost his fighting spirit, his coolness under pressure, or his sense of humor.  Upon first learning the brain tumor news in the hospital emergency room on May 29, 2021, with a wink of his eye and squeeze of Whitney's hand, Gov calmly and reassuringly said, "We'll figure it out".  When the doctor described his treatment options (surgery/radiation/chemo) as "go big or go home", Gov said, "I guess I'm getting my head augered".  At one point he remarked, "What's the point in all this if you can't find some humor in it?". Enduring two brain surgeries in one week, followed by in-patient rehab, radiation, chemotherapy, additional IV infusion treatments, and what sometimes seemed like one gut-punch after another, his amazing combination of strength, calm, and levity through it all was truly awe-inspiring.  It is a testament to his character and what a good man he was, and ultimately, through the grace of God.

Per Gov's wishes, we are not having a traditional funeral, but instead an informal get-together where he hopes you share more smiles, laughs, and good memories than you shed sorrowful tears.  Please join us in that endeavor, at Holiday's Pub & Grill, 1395 West American Drive #B, Neenah, WI 54956, on Sunday, May 1, from 10:30 a.m. until 1:30 p.m.  Online condolences may be made at: https://www.hovcremation.com/obituaries/alan-porter .

In lieu of flowers, donations may be made in Gov's memory to one of his most cherished causes, Wounded Warriors, St. Jude Children's Research Hospital, or your local animal shelter; or to the Tisch Brain Tumor Center at the Duke Cancer Center, or your own favorite charity.

To order memorial trees or send flowers to the family in memory of Alan "Gov" Guido Porter, please visit our flower store.